Schlenkerla is no doubt a popular brand name for smoked beers and is well-known as the Aecht Schlenkerla Rauchbier. Made from barley malt dried over open wood fire, you can taste the smokiness that is very much similar to the flavour of bacon!

Buy and enjoy the delicious Schlenkerla beer today from House of Amber Nectar, one of Singapore’s top trusted alcohol distributors. We provide free doorstep delivery for orders above $100! 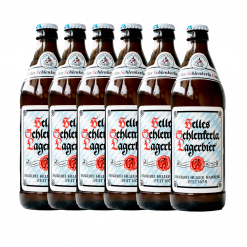 In 1405, Schlenkerla was founded as “House of the Blue Lion”. They then changed their name to “schlenkerla”, which is the German slang for “the little dangler”. This was inspired by a brewer with a limping stance, which is printed on the Rauchbier bottle.

The city of Bamberg in Bavaria is home to the Schlenkerla brewery and the brewery is now managed by the 6th generation of the Trum family. To date, they remain committed to the traditional open-fire malting method to brew their renowned smoked beer.

The Schlenkerla Rauchbier Märzen is reddish-brown and has a distinct smoked bacon aroma through its palate to a clean, dry finish. This is a classic made with 100% smoked malt from the Schlenkerla maltings.

Brewed in traditional copper vessels and matured for months in the 14th century cellars, look forward to a unique smoked beer experience.

The Schlenkerla Helles Lagerbier is a medium-bodied, straw-blonde beer with an emphasis on malt flavors and Bavarian hop aromas with a subtle smokiness.

This beer gets its smokey flavour by using the same brewing equipment and reusing the same yeast as the historic Schlenkerla smoked beer. The end result is a one-of-a-kind twist to the traditional lager beer style, the Bavarian Helles.