The word “dunkel” refers to “dark” in German. So, naturally, Dunkel beers are dark-coloured ranging from amber to dark reddish brown. They are known for their smooth, distinctive malty taste and have a relatively low alcohol percentage of 4.5% to 6%.

Dunkel beers often refer to dark lagers. However, in some cases, they may also be referring to dark wheat beers. When ordering a Dunkel in certain parts of Germany, you’re essentially requesting for any dark beer that’s on tap or most popular.

Hofbräu is one of the global brands of Dunkel beer that we carry at House of Amber Nectar. Shop with us today! 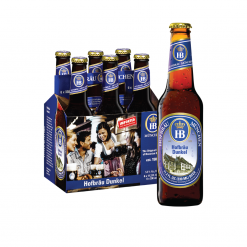 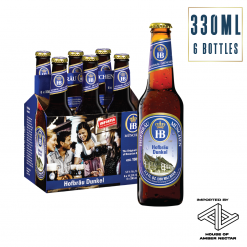 In the 12th century, a version of Dunkel was first brewed by Benedictine monks. After which, two laws were passed which led to the creation of the unique style of this beverage today.

Later on in the 1830s, Gabriel Sedlmayr II invented a new kilning technology which resulted in a cleaner version of a dark base malt. With the influence of climate and technological advances, the Dunkel recipe was improved and developed its current distinctive style.

The sweet and malty flavours of Dunkel beverages would balance well with spicy food and the savouriness of barbecue and roasted meat. It can also pair well with some acidity, for example in desserts such as pomegranate tarts.