Weisse beers are widely loved as the creamy foam in your first sip would win you over. This cloudiness is due to the use of wheat, which is high in proteins.

In terms of taste, Weisse has a unique flavour that highlights clove and banana. Some variations may even have hints of vanilla and bubblegum. Since minimal hop is used in the production, the bitterness is barely noticeable.

House of Amber Nectar is a leading alcohol distributor in Singapore that offers Weisse beers from brands like Hofbräu and Berliner. 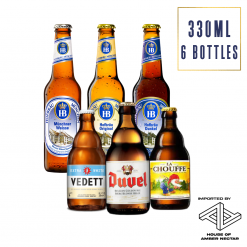 Weisse beers have one of the longest histories - its origins date back to the 13th century in Bohemia, Prague. From the 16th to 18th century, it was the only beer to be produced from wheat. Because of that, its popularity rose tremendously during that period.

However, at the end of the 18th century, brown beers and pilsners became easily available and more popular. It was only in the 1960s when the love for Weisse became apparent again. Today, it is a favourite beer for many, especially on a hot day.

Due to the versatility of Weisse beers, you can easily pair it with any food!